FABULAROSA AND THE FIVE NEW PROTOCOLS

MARIESTAD (SWEDEN) – August 23, 2013 –
Kikusema AB (https://www.fabularosa.com ) announced today that the IT Security App FABULAROSA AND THE FIVE PROTOCOLS has been nominated as the one of
Top Five finalists for the Global Security Challenge 2013 in the pre-revenue category.
The Grand Final is taking place on 12th September at the Royal Holloway University of London.
The Global Security Challenge is the world’s leading security innovation competition, rewarding innovative startups and SMEs.
Founded in 2006, the GSC is the world’s preeminent security prize providing a unique opportunity for start-ups to interact with government, industry, academia, and investors.
We will have 6 minutes on stage to pitch your innovation; followed by a Q&A Session with the panel of judges.
We will accept and hope to win the challenge!

Link to the video

What a home match!
As one of the alumni of the Institute of Management Berlin I’ve presented our security app FabulaRosa in front of MBA students of the Hong Kong Baptist University.
The topic was:
HOW TO BECOME A WINNER WITHIN THE NET ECONOMY?
A CASE STUDY AND ANALYSE OF KEY SUCCESS FACTORS FOR INTRODUCING DIGITAL SERVICES GLOBALLY
The lecture was received with great interest and many remarkable questions were asked.
One of the discussed key success factors was the need for expanding in Asia as the key to a global strategy.
I hope that my lecture was the first step for making contacts and finding partners in Asia.

The Security Industry’s Coveted Excellence Award Winners and Finalists from all over the world were honored by Info Security Products Guide in San Francisco on February 27, 2013
Once again – We’ve carried home the winner’s trophy!!!
Info Security Products Guide, the industry’s leading information security research and advisory guide, has named FabulaRosa and the Five New Protocols a Gold winner of the 2013 Global Excellence Awards in the category “TOMORROW’S TECHNOLOGY TODAY”.
The security industry celebrated its 9th Annual 2013 Global Excellence Awards in San Francisco by honoring excellence in every facet of the industry including products, people behind the successes and best companies.
More than 50 judges from a broad spectrum of industry voices from around the world participated and their average scores determined the 2013 Global Excellence Awards Finalists and Winners. Winners were announced during the awards dinner and presentation on February 27, 2013 in San Francisco attended by the finalists, judges and industry peers.
Info Security Products Guide’s recognition of FabulaRosa and the Five New Protocols further validates our product as excellence-in-class and ahead of the curve.

We are proud to be recognized as an industry player by the Info Security Products Guide, the industry ’s leading information security research and advisory guide and
have been named a Finalist for the 2013 Global Excellence Awards in the category: TOMORROW ’S TECHNOLOGY TODAY.
These prestigious global awards recognize security and IT vendors with advanced, ground-breaking products and solutions that are helping set the bar higher for others in all areas of security and technologies.

We are looking forward making new contacts and maybe we can carry home a winner ’s trophy!

At a gala dinner that drew hundreds of government officials and industry executives to the Washington Convention Center on November 29, Government Security News announced the winners
— including KikuSema GmbH with its security app FabulaRosa– in 42 different categories in its 4th Annual Homeland Security Awards competition.
The winners were selected by a panel of objective judges, according to Jacob Goodwin, Editor-in-Chief of Government Security News.
The judges received an outstanding group of entries and have handed winners’ plaques to an exceptional group of companies and government agencies.
The Security App FabulaRosa is perfect for securing authentication and to keep up with the trend of the new touch-screen devices and Cloud Computing.
FabulaRosa is designed to create High Definition (HD) passwords within the range of a maximum length of 850 characters taken from the UTF16 character set, or a minimum length of 10 ASCII characters.
It creates many different passwords by applying only one image only existing in your mind.
The passwords are not stored at all; they are generated in the moment you draw the image on the screen.
Using universally understood concepts like colours, directions and patterns FabulaRosa is worldwide applicable. FabulaRosa provides you with passwords for ordinary logins as well as for high security applications.
Furthermore the entire authentication process is strengthened by the Five New Protocols.
Authentication by smart phones or tablets becomes essential for the user, both in private or public spaces, whether using trustworthy or untrustworthy devices.
The transfer of High Definition passwords and confidential information by QR code or NFC using a stealth mode represents a paradigm shift in the authentication process.
FabulaRosa is worldwide applicable, in fact everywhere where passwords or pass codes are used. It has the potential to become the common pattern login for operation systems, for business customer and privileged identities.

On 8th of November the surprising message reached us:
Congratulation, FabulaRosa is being selected as a FINALIST in the 4th Annual GSN Homeland Security Awards Program.
This selection puts your organization into an elite group of companies and government agencies who have demonstrated excellence and innovation during the past year in the quest for a more secure homeland.
One winner in each category will be announced at the gala dinner and awards ceremony that GSN will be hosting on the evening of Thursday, Nov. 29, 2012, at the Washington, DC.
We have submitted for the category “Best Privileged Access Management Solution”. (www.gsnmagazine.com)
Perhaps we can carry home a winner’s trophy!
May be we can make a lot of contacts or draw attention among the invited guest like government officials from federal, state and local levels, as well as industry executives from across the U.S..

The conference Information Security Solutions Europe (ISSE; www.isse.eu.com), established and supported by EEMA and TeleTrusT, and the European Commission was held in Brussels this time.
During this event we have demonstrated our App FabulaRosa within the TeleTrust Partner booth. We were proud to present the app on iPhone, iPad, Android tablet, and Android smart phone as well as on the old-fashion desktop.
There were some interesting discussions and contacts.
We have succeed to arouse the interest of James Sheire, NSTIC/USA, as well as e of the leading European cryptographer Bart Preneel .
We hope that Professor Preneel will find the necessary time to undergo a strict examination of the algorithms, which FabulaRosa is based on.

During February 13-15th 2012 we were exhibitors at the USEUCOM.
This time it was a ’home game’ for us, because the conference took place in Germany, Munich and we were able to present our app ’FabulaRosa’ with a lot of equipment. We presented our app simultaneously on Intel-PC, iPad, Samsung Galaxy tablet and on Android Smart Phone.
In the run-up to the exhibition we made up a list of all accounts or logins, we call it addressees, which we are regularly using. We came up to number of 109 addressees and the trend is increasing!
Imagine – nowadays the first activation of a new tablet requires already about five logins.
That means the old fashion password isn’t dead and we are on the right track.
It applies to overcome the disadvantages, to create advantage and come up with new ideas for the future.
We are convinced that our ’New Protocols’ containing features of QR-Code-Mode, Time-based stealth mode and a ’Secret’ based login are forward-looking technology for strengthening the entire authentication process.
Our booth was well visited, we made some contacts and perhaps we have succeeded in attracting attention beyond the civilian sector.
Our next step is to publish ’FabulaRosa’ for iPhone a.s.a.p.

The 2-day innovation marketplace event ’PitchLive’ took place at the Business Design Centre in London, UK on 24 & 25 October. More than 30 innovative startups and SMEs pitched to crowds of investors & end users.
…and we were one of them! We had the chance to present our application within 7 minutes.
We were proud to announce that FabulaRosa is available in all the important market stores (Apple, Android, Blackberry, and Intel).
We introduced our ’4 New Protocols’ for protecting the entire authentication process by
1. Transferring password by QR-code.
2. Transferring only disguised passwords using a time-based stealth mode or
3. Using a ’Secret’ based login.
4. Supporting a multi-component authentication and processing of confidential information.
We hoped that potential investor were listening attentively.
We are convinced that FabulaRosa fit for NSTIC, the National Strategy for Trusted Identities in Cyberspace and that FabulaRosa has the potential to become the common pattern login for operation systems, for business customer and privileged identities.
In additional we had a booth at the simultaneous expo. We have received a lot of positive feedback for our pitch and the booth. 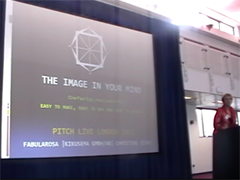